Jacob is a child of the digital age and lives in Los Angeles. The fast paced world whirls around him and it’s only increasing in speed. It seems as if people are hooked on this pace and a nearly insatiable need to check cell phones constantly. His grandparents seem to be the only ones not […]

What does love look like? It has the hands to help others. It has the feet to hasten to the poor and needy. It has eyes to see misery and want. It has the ears to hear the sighs and sorrows of men. That is what love looks like. Saint Augustine

‘I promise you, Mr. Owl…I will leave this and every mouse in the yard to you. Your claws are most impressive, so, if you don’t mind, I’ll just let you and the mice alone.’

From all I can gather, flight teams like The Blue Angels fly as close as eighteen inches apart. I think I’ll pass on that offer to take a flight with them.

What lens will you choose to view the world through today? Will it let sufficient light in so that your day is full of promise and possibility? Perhaps you’ll empathize with those who have selected to see the world in a dimmer and more limited light.

Chains do not hold a marriage together. It is threads, hundreds of tiny threads, which sew people together through the years. Simone Signoret

Robin loves the tranquility of this place. She breathes deeper…and more slowly. Her mind doesn’t flatline but seems so at ease. Robin doesn’t worry about tomorrow here. The enchanting blue water and the seagulls remind her that fretting is such a misuse of time. Some of her most creative ideas and solutions have magically come […]

The family that hunts ducks together…stays together. Eileen proudly mentioned that she nailed 13 mallards and her closest rival got 7.

Seek wisdom from your elders. They have insights to share if you take the time to tap their knowledge. It’s like an advanced class in course correction and costs no more than a cup of coffee at Starbucks.

It’s common knowledge that whales can communicate from thousands of miles away and that dolphins have their own unique form of communication. The truth is, most fish have a language all their own.

A very young cowboy has been looking forward to tonight for six weeks. Friday, November 28th. at 7:00 p.m.. Nat Geo Wild is showing their special on the fiercest animal predators on the planet. I’ve long been fascinated by mountain lions and leopards and tonight’s show will feature them cheetahs and gigantic crocodiles. In cowboy […]

I generally find pictures of dogs to be much more compelling than those of cats. In over twelve hundred morsels completed in the last fourteen months, there’s been two hundred or so about dogs and only one relating to cats. When Luke jumped up on the counter yesterday, I knew his photo would be blog […]

Rick and Marsha were married in Vail in 1982. They honeymooned in Hawaii before settling into life in suburban Denver. Rick loved his work as a corporate lawyer and usually was the first one to arrive at his office in The Denver Tech Center. Marsha was a fifth grade teacher at Franklin Elementary school in […] 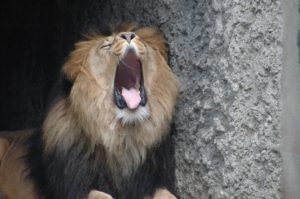 The King of the jungle. Some interesting facts about lions. A lion’s roar can be heard from five miles away. Lions can sleep twenty hours per day. They can run 50 miles an hour for a short distance and leap thirty-six feet. Female lions do the hunting but males eat first. Baboons have been known […]

Divorce has far reaching effects. Children are hurt in different ways and many seem to retreat to a small cave inside to protect themselves from further pain.

What can you learn from this photo? He’s playing on what surface? His focus on the ball indicates he’s been coached to ‘Track it …..? You finish this phrase. He is six to eight feet behind the baseline so he is striving to play this ball four to eight feet above the net. It would […]

At critical junctures you have to jump the curve. You have to reinvent yourself. Reimagine your life. That’s what dreamers do. From Chase The Lion by Mark Batterson

So much to look forward to these next few weeks. Thanksgiving…Christmas and New Year’s not far behind. Sure, there will be snow and cold in Colorado but this too shall pass. It will be April in no time with spring flowers in bloom and rivers swollen with snowmelt from on high. What’s not to love […]

There’s great value to knitting or digging up your garden or chopping up vegetables for soup, because you’re taking some time away from turning the pages, answering your emails, talking to people on the phone, and you’re letting your brain process whatever is stuck up in there. Chellie Pingree